Valeri Dimitrov is training karate since 1995. He is Bulgarian National competitor and currently holds 21 European and 3 World Champion titles. He is extremely humble person no matter his success. In this site we will try to introduce his numerous achievements as karateka and as a person to inspire the young generations. But let’s start from the very beginning.

He had a dream to practice karate ever since he was a small child and was waiting for the moment when he can start practicing and going to trainings himself. He started practicing at the age of 14 in Georgi Popov’s dojo which is called ASKK Trakia Plovdiv. His passion for karate was obvious from the very beginning. One of his first instructors granted him green belt after 2 years of training which did not happen for any one before him. He started taking part in National tournaments and winning them in convincing way. 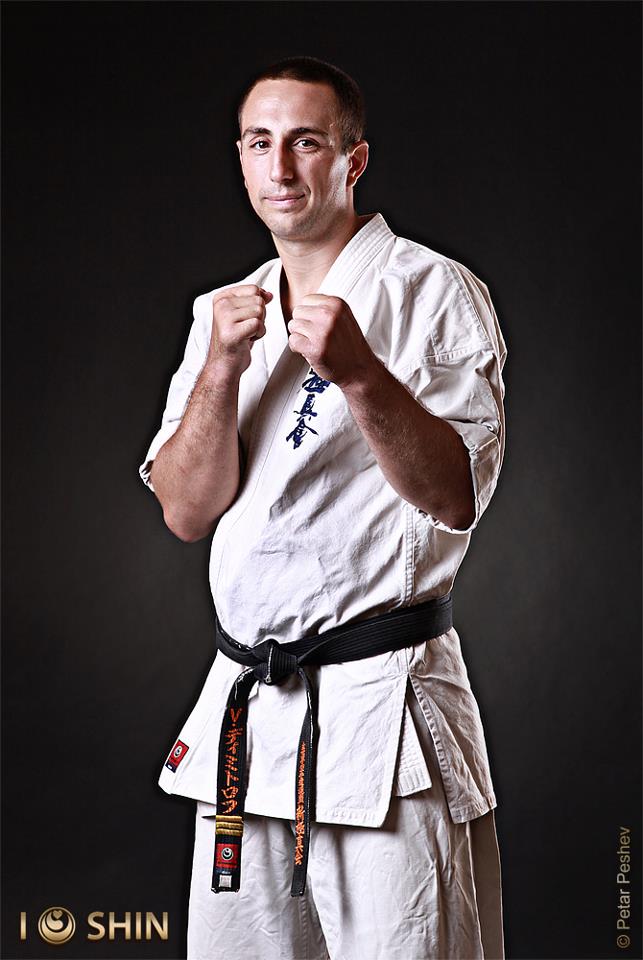 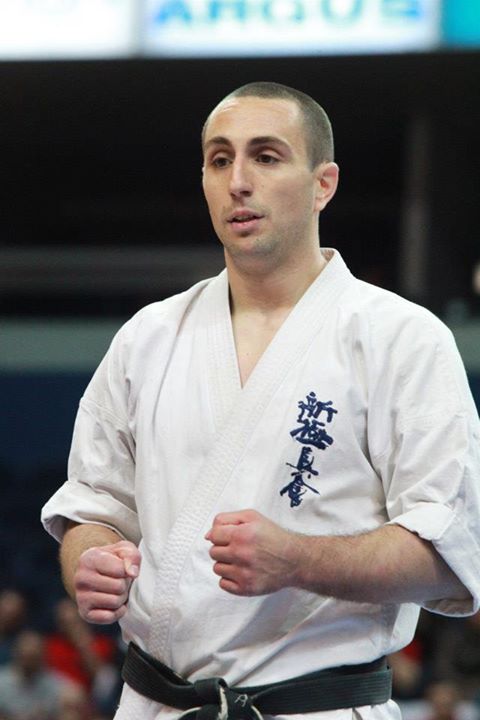 He had a dream…

to become in the best 8 at the World Championship Open Weight. An achievement, which was far beyond anything done from any Bulgarian fighter before him.

In 2001 was his first participation in European championship. He was at the age of 19, very young and full of desire to give his best. It was an amazing tournament for the Bulgarian team as the competition ended with not one, but two European titles! He becomes European champion after 5 fights in a very convincing way in -80kg category.

His teammate, Dimitar Popov is champion in -70kg at the age of 18. This was the beginning for a new Era for the Bulgarian Kyokushin karate. After this tremendous success of these fighters many of the new coming Bulgarian competitors got to the best 3 in European and World championships. The main guest of this European championship was Shihan Kenji Midori – President of the World Karate Organization. He notices his talent and invites him for 2 month in Japan. Valeri wins two international tournaments – in Amami and Fukuoka, which is quite impressive for a non-Japanese fighter. 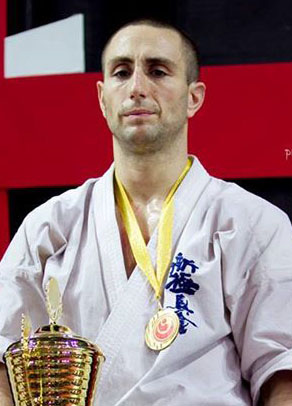 In 2002 he becomes champion in Open weight category, fighting with heavier and stronger opponents. This is a serious request for the upcoming 8th World Championship in Tokyo in the following year, which is also held only in an open weight division. His dream is coming in realization so soon….

At the World Championship in 2003, in Tokyo in Open weight category, he becomes 4th. The biggest surprise of the competition was the 1/4 finals, where he knocked out the Japanese favorite for the world title – Norichica Tzukamoto (1996 World Champion, 1997 World Champion in + 80kg division, Multiple Champion of Japan in absolute and heavyweight). At this point even the Japanese think that Valeri will be the new world champion. Unfrotunatelly, a serious trauma stops Sensei Dimitrov in the semi-final against another Japanese favorite. This is the biggest success for the Bulgarian kyokushin ever since then.

In 2005, Sensei Dimitrov returns to the competitive Tatami and again wins the European Championship title in Denmark. The same year he becomes champion in the World Cup in -80 kg. weight division in Osaka, Japan. This is a serious comeback after more than a year of recovery and absence from the European and world tatami. 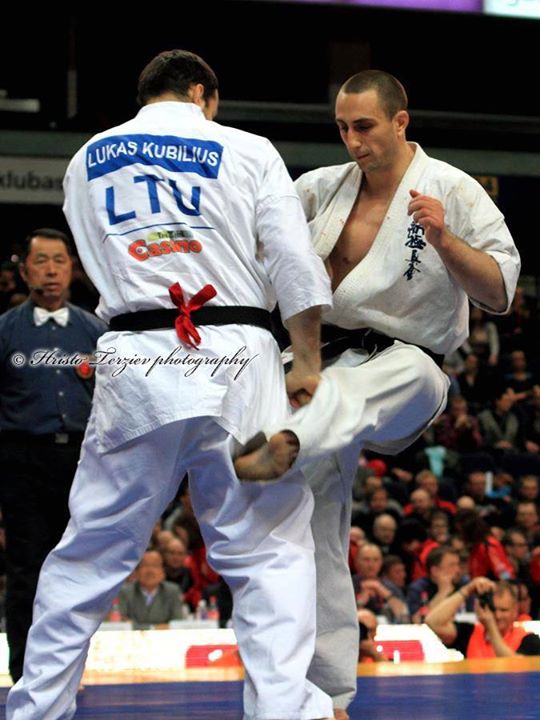 Following are European titles in 2006 and 2007. At the 9th World Championship in 2007, Sensei Dimitrov reached the top three, losing only to the semifinal of the champion Takayuki Tsukagoshi. He is also awarded the prize for the “most technical fighter” of the tournament.

In 2008 he becomes European champion for 6th time, this time in Plovdiv, in front of a local audience. He is the only Bulgarian who manages to win the title. That same year he defends the third dan (black belt with 3 stripes) with main examinee Shihan Keiji Sampei (7th Dan). Evidence of his incredible mastery and experience, despite his modest age, is the invitation to take part in several international camps as an instructor.

In 2009, Sensei Dimitrov became the European heavyweight champion for the first time, becoming the only European champion in three different categories.In the World Cup in St. Petersburg he is again champion, but this time in the heavyweight division. This is the second World Cup title for him.

In the following years 2010 – 2013, he remains unbeatable on the European Tatami, winning all the championships, including the absolute category.

In 2016 he became the European champion in the 85 kg category.

1In 2017, due to serious knee injury, he could not continue the competition and ranks 3rd in the +85 kg category. at the European Championship in Denmark.

2018 is again a big return… At the age of 37, after a serious injury he wins the European Championship in -85 kg category. Further, the same year he also wins the title in the open weight division, which is the 18th European title for Valeri Dimitrov. This is a precedent in national, European and world scale, not only in karate but in the sport as a whole.

2019 is another good year of his career. At the European championship in Lithuania, he becomes European champion for 19th time! After this event is held the first Valeri Dimitrov’s fighting seminar in Bulgaria. It is a very successful event with participants from 12 countries.

His last championship for 2019 is the World championship where he is awarded with the 4th place. He has 7 very good fights with experienced fighters from Croatia, USA, Kazakhstan, Poland and the hosts – Japan. He achieves to win against strong Japanese fighters as Kazufumi Shimamoto (with wazari) and Kembu Iriki. He loses the semifinal versus Maceij Mazur with 3:2 judge decision after 2 extensions and from Daike Kato again with 3:2 judge decision. The fights can be found on youtube.

In 2021 he becomes European champion for 20th time, which makes his success more than unique not only for karate, but for the world of sport. He wins this title after 4 fights with much yonger competitors at the age of 39. It is historic as it is his 20th European title after 20 years being at the top of Europe and winning the champion title in almost all the categories and open weight.

In 2022 he wins his 21st European title at the European championship in Poland! This success is a proof that he has extraordinary will and believe in the humen possibilities….

Valeri is not like the other champions of any sport. He is different, not only because of the record number of European and world titles. It is all about his humility and humanity. He is not looking for fame and popularity, but just doing what he best knows – to wins – but not against opponents, but himself…

Despite his 21 European and three world titles, Shihan Valeri Dimitrov remains an ordinary man, but with unusual achievements. 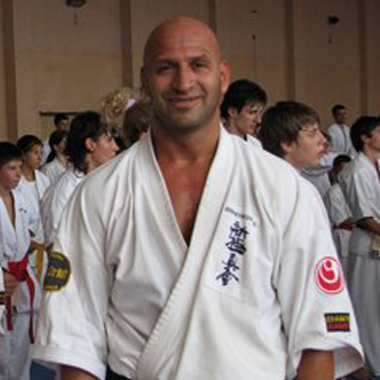